Personally, I'm rather fond of hearing just enough to grab my interest and tell me I might want to play it, and then not hearing a goddamn thing about it up until release, except occasional assurances that the game is coming out and that the companies and talent involved haven't done anything totally asinine to turn me off of supporting them.

Because, you know, speak with your wallet, right? Use your capital to influence those who want it, those companies who are already dictating your tastes via spending so much of their capital that every publication needs to talk about every one of their new products incessantly, in a deluge of attention that will guarantee that no matter how much you don't want to hear about a given game, you will. You will! It'll seep in through the cracks in the levies you put up on social media, and you will hear about it, because hearing about it means The Consumer within you will be more convinced to indulge, and that is how corporations exist. Reminder: All corporations are bastards.

I'm not saying to spend money on everything, irrespective of your views on the political positions the creators have, obviously, but when corporations are involved, your vote is dust in the wind to them. Blockbusters care not for an individual's action when they can count on the apathetic majority. Borderlands 3 is going to sell a shit-ton of copies even despite Randy Pitchford being a skeezy trash gremlin (I'm being unkind to trash gremlins with this comparison). Every article about Randy Pitchford being a shithead has a chaser of "ooh, shiny new game" details to wash the taste out of your mouth. That's part of games journalism's complicity in capitalism. It's enthusiast press. Emphasis on the enthusiasm. If you're not excited about video games, you're the next coming of Jack Thompson, here to ruin video games forever.

It doesn't help that Gamers, as whatever loose demographic you think fits the stereotype, have a terrible memory for current events. Complain about outrage culture all you want, it's still kind of wild that so many people have either forgotten or forgiven the fact that THQ Nordic had an AMA on a board that hosts some vile and illegal content, and the person responsible still fucking works there. This was three goddamn months ago but nah, sure, enjoy your Spongebob remaster. Even the well-meaning people have forgotten because the excitement for a game kicked in.

Am I saying everyone should stop being enthusiastic about upcoming games they're interested in?

I mean, no. That'd be a hilarious position to take and one I wouldn't have the energy to defend.

No, I think that what really needs to happen is that the average person (ie someone who probably can't be bothered to read some weirdo's rambling about people getting too hyped for shit), and like, a lot of these hypothetical average people, need to chill the fuck out about blockbusters. It's not necessarily their fault, but they're not helping. Pre-release hype needs to stop. We've already had consumer advocate movements against pre-ordering, and that helps, but.. we need to stop listening when corporations tell us, very loudly, that their new game is important.

Nintendo is the biggest offender on this front, to be honest. I'm basically done with Nintendo as a first-party developer, and, aside from the concerning amount of puzzle games I play on the Switch, as a hardware manufacturer as well. Their games, polished to a mirror sheen, prompt nothing but disinterest for me. If Nintendo cooked a meal for me, it may look nice, and the texture would be pleasant, but it would be flavorless, soulless, and without any nutritional value. Nintendo makes little more than toys, and I know video games can be much more than that, and even other games that do little to stimulate intellectually usually do it in more interesting ways than Nintendo has settled on.

Despite this, every time they host a Direct, my Twitter timeline explodes with zeal I find distressing. I have never watched a Direct, because I know that I will get every single goddamn point from even the most tight-lipped on my timeline talking about it. Nintendo is a blockbuster game made manifest, and it's exhausting. Today, they revealed more details about the only JRPG series that has changed less than Dragon Quest! Oh boy, it's Pokemon, and it's on the Switch, and characters exist, and everyone wants to hug a sheep and fuck a trainer. And there's a dog with a sword that immediately got compared to every blade-wielding dog that is already in video games. Neat, I guess.

Social media is fun if you want to watch, in real time, the echoes of corporate capital at work. See the ripples spreading through your timeline as games' official accounts drop a piece of information, like a bit of food into a pond with an unnerving amount of fish. Sorry, did I say fun? I meant to say exhausting again, my mistake.

I'm not a major stickler for avoiding spoilers personally, but I do have kind of a guideline I follow for consuming media, and it's related to the first paragraph. I don't really like to hear anything about games before I get a hold of it, because prejudice and pre-conceived notions of how elements of the game are going to work together. When I've got access to a game, I'll work through it at my own pace. Usually, that's fairly quickly, because my policy tends to be "if I have time to think about the game, I should be working on playing it instead." Barring reasons for me to have to be away from the game, this ends up putting me in kind of a passive role as consumer, but mostly because I wait until I have what I consider to be a complete view of the media before I start making judgments about things. I try, at least. In series like The Witcher, by the time we hit the games I knew what I was getting into so I didn't really need to wait until the end of each game to judge it.

Hype cycles throw several wrenches in this style of media consumption, if you couldn't tell. People spending days, weeks, months shouting about the latest leak or announcement from the game? That's less of the game I get to ingest on my own terms, which tends to be high on my priority list. I don't know a goddamn thing about Death Stranding because I haven't read anything or watched anything past one of the first trailers. That's how I like it. There's a game that's coming out in August that I totally forgot the name of until a month ago and saw nothing about since E3 of 2018, and I'm still kinda excited about it. It's called Control. Even with that trailer, I know little to nothing about it, and I'm excited because of that.

I'm excited for the new expansion of Final Fantasy XIV, because I know a decent amount of mechanical changes but not the actual content of the game I'll get to use them in, which leaves me room to enjoy myself. I'm excited for Monster Hunter World Iceborne, because it's more Monster Hunter, and even if they spoil every new monster, the actual act of fighting them is going to be fun. Both of these are known quantities I enjoy, But Now There's More. That's fine. But when it's a new IP from a studio I know or a game from a studio I don't know, I just need the elevator pitch. Don't ruin my appetite by giving me too much ahead of time.

I'd like some of the mystique of AAA-developed games to come back. The internet and social media has made it all too easy for corporations to drip feed information into the waiting masses' open mouths for them to regurgitate into everyone else's feed. That's not going to change without massive systemic and social change. Capitalism is a dread beast that even ruins all the cool stuff we get via technology developed under it.

Honestly, I'd love if AAA games just... stopped. No more 100-hour work weeks, no more brute forcing the development process into annual products with raw numbers... We've got too much great talent trapped within that structure. But, again, massive systemic change. There's no way the entire top crust of the industry is going to crack, no matter how much it would benefit the diversity of games.

So I guess what I'm saying is... when I don't want to hear shit about Pokemon for the Nth year in a row, cut me some slack. I'm tired of dealing with the spittle of uncritically-regurgitated capitalism that comes along with shouting about an extremely boring RPG series I've outgrown. Is that so wrong?

Chill your hype, burn your idols, and, in the words of Killer Mike: 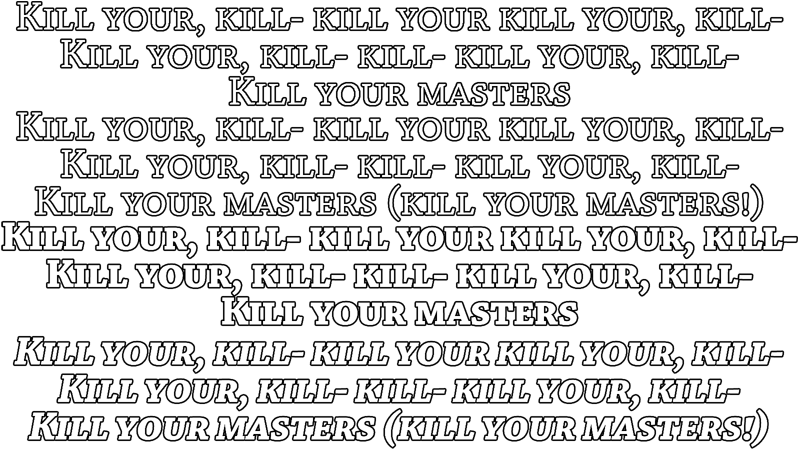 Posted by SylvanFlux at 2:07 AM

Email ThisBlogThis!Share to TwitterShare to FacebookShare to Pinterest
Labels: games

SylvanFlux
I used to be a great many things, none of them very flattering, and now I'm fewer things, but much more put together. Former host of a monthly critical podcast about JRPGs which ran for three years, former host of a travelogue podcast about the Witcher series, and a current ne'er-do-well who continues to think too much about anime and video games.